After insulting the food in front of the prison chef, Piper is starved out by the kitchen staff and struggles to offer up an acceptable apology.

WhenLarry comes for a visit, he complimentsPiper on her cheekbones but that’s because she hasn’t eaten in days due to insulting the food in front of Red. She tries to get food from the vending machines with Larry’s change, but Red, anticipating that Piper might try that, made the machines appear out of order.

Alex tries to help Piper out by sneaking her a cube of cornbread, but she would rather starve than accept help from the woman she blames for landing her in prison in the first place. And the staff notices, and stops feeding Alex as well.

While Red and the kitchen staff try to deal with a broken freezer, nicknamed Betty, Piper confronts Red. She’s willing to take a punch from Red if that’s what it’ll take for Red to forgive her. Instead, Red yells at Piper. She tells Piper that her punishment is not temporary and that she’ll be leaving prison as a skeleton.

Piper isn’t going to give up, however. As part of her plan to win Red over, she obtains cocoa butter from Sophia Burset – the resident hairdresser, it seems – by giving Taystee – who’s getting worked on by Burset – a piece of her blonde hair. Piper also obtains hot peppers from Crazy Eyes, a particularly weird inmate.

Meanwhile, Red talks to Healy in the men’s bathroom about the freezer situation and manipulates him into buying a new one.

During all the food drama, Daya walks in to see her mom, Aleida Diaz, who greeted her the previous day by smacking her. But instead, is confronted by another woman, Maritza, who claims to be her mother's daughter too and calls her "puta". After, Aleida refuses to give Daya any extra khakis, and says not to try for them too soon saying she’ll be “old news” as soon as she’s out of her newbie orange jumpsuit.

On the stair case, Daya asks Officer Bennett for some gum, but he denies saying he can't show favoritism. But later that night, she finds a piece of gum under her pillow.

After being given hot peppers, Piper has been crunching on them. Pornstache - the creepy prison guard – remarks on her tears, thinking she’s crying because she’s upset about something. In reality, she’s using the hot peppers to make paste. She uses the paste, along with the cocoa butter, to make a lotion for Red’s sore back.

The day after Piper gives the paste to Red, Morello gives Piper a tray of food, appearing that all is forgiven.

Later on, everyone is watching a movie and Crazy Eyes sits down next to Piper, offering to share her earphones. And to Piper's surprise, Crazy Eyes caresses Piper's thigh, leading to Lesbian Request Denied.

Note: Flashbacks are arranged in chronological order, not the order in which they occur on the show.

The flashback begins in Red's restaurant. The Russian mafia use it as their place to have social gatherings, bringing their wives with them. Her husband, Dmitri, is trying to impress the men and encourages Red to befriend their wives, in hopes of Red joining their social circle. She later joins the women on one of their walks, where she is clearly the odd one out in terms of dress and style. She tells an insulting joke that ends up alienating her, although she doesn't realize this initially and waits for them to invite her again. Whilst shopping for bread, she spies the women walking without her. During a confrontation, Red punctures one of the wives’ breast implants. As compensation, Red’s husband agrees to hold secret packages in the restaurant's freezer for the mafia, which appear to be body parts.

Flashbacks show when she and Larry went on the Master Cleanse, a liquid-only cleanse consisting of lemon juice, maple syrup and cayenne pepper mixed into hot water.

It’s her idea and Larry is reluctant to go on the cleanse, but after some prodding and semi-guilt-tripping by Piper, he gives in. However, it turns out the cleanse is much easier on him than it is on her. Piper wants to cut the 7-day juice cleanse short. She admits to Larry that she couldn’t endure it. He teases her about it, but – ultimately – he’s very understanding.

"Like this is Radison and you don't like your room?""
— Healy to Piper
"I just din't expect to be punished while I was getting punished."
— Piper
"From here on out, this place will hit you for me."
— Aleida to Daya
"That ain't just an ice cream. It's a King Cone."
— Taystee to Flaca
"When I first got here, I had troubles like you. There was a disagreement. Then we brawled. That's how you settled things. And if I'd have won, I'd have been la jefa."
— Miss Rosa to Piper
"Thank God I got cancer. No one fucks with cancer."
— Miss Rosa to Piper
"She issued a fucking fatwa against me."
— Piper to Larry about Red
"How am I supposed to prison-fight an old Russian lady with back problems?"
— Piper to Larry
"You're not getting hazed, you're not getting harassed, you're getting starved. To death."
— Red to Piper
"A dying animal, or just a man who eats your food?"
— Caputo to Red
"Shit. You're still a lesbian."
— Pete to Piper in a flashback
"'Please" is for commissary hoes and Oliver Twist."
— Sophia to Piper 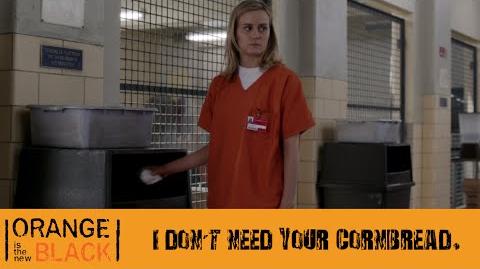