1999 - present
Taryn Manning is an American actress, fashion designer, and singer-songwriter. She is the vocalist for electronic duo Boomkat and co-owner of the clothing brand Born Uniqorn. Manning got her first major role in 2001 as Maddy in Crazy/Beautiful, and is known for her roles in Crossroads, 8 Mile, A Lot Like Love, Hustle & Flow, Weirdsville, Jack and Jill vs. the World and, most recently, for her role as Tiffany "Pennsatucky" Doggett in the Netflix series Orange Is the New Black.Manning was born in Tucson, Arizona, USA, the daughter of Sharyn and musician Bill Manning, who divorced when she was two months old. Manning's mother gained custody of her and her brother Kellin. At the age of 12, Manning moved with her mother to Encinitas, California, where she attended Oak Crest Middle School. She has been a karate state champion in Arizona.

Her father was first cousins with Archie Manning.

Manning began acting in the late 1990s, appearing in small roles in several film and television productions, including episodes of The Practice, Get Real, Speedway Junky, NYPD Blue and Popular. She also made a guest-appearance on the TV series Boston Public, in a role that was specifically written for her. In 1999, she was featured in an independent film called Speedway Junky. She also auditioned for the American version of Popstars, which aired in early 2001 on The WB.

She made her film debut with a part in the romantic drama Crazy/Beautiful, which was followed by a role in the 2002 feature film Crossroads, where she played one of two best friends of singer Britney Spears. She appeared in 8 Mile as B-Rabbit's ex-girlfriend, Janeane, and in Peter Kosminksy's White Oleander. Along with supporting roles in the films Lucky 13 and Debating Robert Lee, Manning appeared briefly in Anthony Minghella's'Civil War melodrama Cold Mountain and in the romantic comedy A Lot Like Love.

Her breakthrough role was as Nola, a prostitute in Memphis, Tennessee, in the 2005 film Hustle & Flow. Manning was nominated in the Washington D.C. Area Film Critics Association Awards for Best Breakthrough Performance. Director Craig Brewer saw Manning's picture in a photography book and was convinced that the actress who played Nola should look just like her. "There are some people who put on trashy like a wardrobe, and Taryn can play those roles with dignity and earnestness," Brewer said of Manning. In a "making of" featurette on the Hustle & Flow DVD, "Behind the Hustle", Brewer talks about how surprised and delighted he was to later realize that the model who had originally inspired his image of Nola's look turned out to also be the actress playing her.

Her other subsequent film roles included roles in Unbeatable Harold and When the Nines Roll Over. When the Nines Roll Over is a drama film centred around a jaded hipster A&R executive tries to steal a talented and sexy young singer away from a small label. Her next film was Weirdsville, a dark comedy co-starring Scott Speedman and Wes Bentley. Boomkat's song "It's Not My Fault" appeared on the soundtrack for the film as a duet by Manning and John Rowley. In 2007, she played Ivy Chitty on the short-lived but critically acclaimed Fox television series Drive, which was a drama about various people competing in an illegal cross-country road race. In After Sex, seven short films within one, Manning played the supporting role of Alanna. She had leading roles in the horror films Cult and Banshee; in the latter, she performed her own stunts. "I got hurt one day during one of the chase scenes, where another car crashed into my car," Manning explained of her stunts.

Manning appeared in the romantic comedy Jack and Jill vs. the World. She played Rita Cherry on four episodes of Sons of Anarchy; co-star Katey Sagal called her performance fantastic. At first she made a guest appearance on the show and later rejoined, because her performance was so well received. Later in 2008 she appeared as the female lead in Butch Walker's music video for "The Weight Of Her" and in will.i.am's collage-style music video, "Yes We Can". She co-starred with Bill Pullman in the surreal drama film Your Name Here, in which she played Nikki, who is based on Victoria Principal. The film is based loosely on sci-fi writer Philip K. Dick's life.

When she was a child, she appeared in many musicals and plays. She admires her friend Gina Gershon's musical appearances. In 2009, she appeared as Rose Atropos in a dramatic music-themed film The Perfect Age of Rock 'n' Roll. The film received mostly favorable reviews from critics and fans. Manning joined forces with Ron Perlman in two 2009 films, The Devil's Tomb and The Job. She also appeared in a horror film Kill Theory, which tells the story of a group of college students, who find themselves targeted by a sadistic killer. Drama film The Job premiered at the San Diego Film Festival on September 25, 2009. Critics called the film "entertaining and fun with twists that arrives like clockwork".

In 2009, Taryn portrayed Caroline Bishop, the love interest to Kris Black's coal miner turned boxer in Five Good Years. In February 2010, she was cast in the 2010 remake of Hawaii Five-0 as the younger sister of main character Steve McGarrett.

In early 2012, Taryn signed on to star in the supernatural web series The Unknown, which premiered on Crackle on July 13, 2012. In 2013, she began playing Tiffany "Pennsatucky" Doggett in the original Netflix series Orange Is the New Black.

In 2003, Manning and her brother Kellin formed the band Boomkat. The band first signed a major label deal with American Idol producer Randy Jackson, but the deal fell through. Robbie Robertson then signed them to DreamWorks Records, which was Boomkat's label from 2002 to 2004. In 2002, she sang a rendition of "I'll Take You There" with Tweet in several Gap commercials directed by Peter Lindbergh. Their debut album, Boomkatalog.One, was released on March 18, 2003. Boomkat released two singles "The Wreckoning" and "What U Do 2 Me". The first single, "The Wreckoning", hit #1 on the Hot Dance Music/Club Play chart. The band closed out 2003 as the #5 Hot Dance Club Play Artist for the year in Billboard Magazine. Music from Boomkatalog.One has also appeared in movies, including Mean Girls, Crossroads, The Hot Chick, 8 Mile and The Italian Job.

After a hiatus, in an interview in October 2005's issue of Nylon magazine, Manning mentioned that Boomkat would be back eventually, and that she is writing songs for the new album once they find another record label. Boomkat released their first single in four years, called "Runaway" on April 8, 2008. In early June 2008 Boomkat's second album A Million Trillion Stars became available in online stores. In October 2008, Boomkat played several shows throughout the Los Angeles area, hitting spots like North Hollywood's NOHO Scene Festival and venues such as the Viper Room and Hotel Cafe. In December 2008 Manning recorded a version of Tom Petty's "Christmas All Over Again", which premiered on her official Myspace page. On March 3, 2009, their official first single, "Run Boy" was released along with a visually electric music video. The single premiered on People.com. A Million Trillion Stars was officially released in stores on March 10, 2009 by independent record label, Little Vanilla Records. In 2009, Manning was featured on indie band Dreamers' song "Lonely World", as well as in their new music video called "The Dreamers". In the music video, she takes on the role of Ring Master. On October 28, 2009, she announced that Boomkat is working on their third studio album.

The bands 5th music video from A Million Trillion Stars premiered on MySpace on Wednesday February 17, 2010.

In September 2009, Manning stated that she is working on a solo album. The album is "dance music and it’s colorful, flamboyant, if you will. Boomkat’s a little darker, experimental, like Portishead kind of stuff," she told in an interview with Adam Bernard. She sang her first solo single, "So Talented" in an episode of 'Melrose Place. The song was written with the producer Linney (Darkchild Entertainment). On September 3, 2009, it was confirmed that two tracks were completed for the album.

After the song "Spotlight" was featured in an episode of Manning's show Hawaii Five-0, it was released as a teaser for the album via iTunes & Amazon MP3. "Turn It Up" is being released as the first official single. The music video premiered on People.com on May 4, 2011. "Turn It Up" peaked at #21 on Billboard's Dance/Club Play Chart in October 2011.

Taryn's single "Send Me Your Love" was released digitally worldwide on August 21, 2012. It was also featured on Perez Hilton the next day. The song is the first official single from her solo album intitled Freedom City to be released September 2012.

Boomkat's record company, Little Vanilla Records is owned by Manning. She has a clothing line called Born Uniqorn with best friend Tara Jane. The brand was founded in fall 2005. Born Uniqorn' has hosted many benefits for charity organizations in Los Angeles. Her fashion icons are Kate Moss, Nicole Kidman, Cate Blanchett and Kate Winslet. Manning was honored with "Film Fashion Visionary" award at the 2009 Bel Air Film Festival. She has appeared in Juicy Couture's advertising campaign and in Frankie B`s spring 2009 campaign. They shot a short film, which follows a day in the life of a Frankie B. woman. The video is called "Let's Get Lost" which is the original song featured in the video by musician Gilby Clarke with vocals by Manning.

She was cover featured in the yearly "Sex & Music" issue of Playboy for April 2011.

Manning was aboard JetBlue Airways Flight 292 when it had to make an emergency landing at Los Angeles International Airport on September 21, 2005. She stated, "It was the most surreal, out-of-body experience I ever had". 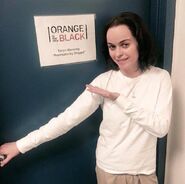