Orange Is the New Black Wiki
Register
Don't have an account?
Sign In
Advertisement
in: Under Construction, Cast

17
Tamara Torres is an American actor. She portrays the Weeping Woman in the Netflix series Orange Is the New Black.

Tamara Torres was raised by her Puerto Rican and Cuban parents. She started performing in Musicals whilst in elementary school.

She has a BFA from Pratt Institute, where she studied Fine Arts, Dance, Drama and Design. Whilst in college, she trained in Method Acting with Lee Strasberg, Arthur Sherman, Jeffrey Horn and George De Cenzo and studied voice with Dr. David Fairchild. She trained at the Alvin Ailey Dance Center with Jo Jo Smith and Laura Dean.

Torres has appeared in numerous theatrical productions including Musicals, Classical Theater and Avant-Garde. She has been in many films and TV Shows, and is currently playing the Weeping Woman on Netflix's Orange is the New Black.

She has appeared on The Good Wife, Alpha House, Broad City, Law & Order, Like Sunday Like Rain and Blue Valentine. She has done print modeling. Has toured with Jazz Orchestra and recored a Latin Jazz CD called Tu Esencia; the music was composed by Lou Perez and arranged by Oscar Hernandez. She has a passion for acting, music, photography, painting and philanthropic service. [needs ref] 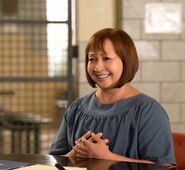