Take a Break From Your Values

Take a Break From Your Values

"It Was the Change"

"Take a Break From Your Values" is the eleventh episode of the second season of Orange Is the New Black. It is the twenty-fourth episode of the series overall. It premiered on June 6, 2014. It was written by Nick Jones and directed by Constantine Makris.

Piper is shocked at an unexpected change in her status; Soso’s hunger strike attracts new support that takes on a religious fervor.

The inmates watch a weather forecast reporting on a storm. Brook Soso discusses the hunger strike with a small group at her table. After a brief quarrel between them and Sister Ingalls occurs.

Natalie Figueroa and Joe Caputo discuss Pornstache's sexual assault. Figueroa tells him that she'll be fixing the B Dorm bathroom.

Dayanara Diaz talks to Piper Chapman about the newsletter, interrupted by Soso who requests her strike to be in it. Chapman reluctantly gives her consent. Afterwards, Diaz is stopped by John Bennett who asks her if she can talk. Coldly, she asks him whether that's an order, and when he says no, she refuses and leaves.

In the library, Vee asks Poussey if she's back at work already. "That was a nasty fall," she says, referring to Crazy Eyes beating her up. Poussey taunts back, asking her if she came back to prison on purpose because she was powerless for the real world. "How much worse do you want this to get?" Vee replies, pushing the library cart against her. Poussey laughs and says, "How much worse you got? Bring it. What do I got left to lose?"

In Healy's office, Piper shows him his "Safe Place" advertisement in her newsletter. She also asks him to add Alex Vause to her calling list, telling him that she's been writing her letters and she wants closure. He is reluctant, but signs. Piper, in turn, writes "grateful" on the feelings card. "That's a great word," Healy says, smiling.

Red storms off to Frieda's bunk, mistakenly thinking that she was the one to sell her out to Vee. Nicky Nichols restrains her, and they are shown leaving and going to the bathroom. Nicky demands to know why she's making "crazy accusations" when she has just gotten her family back, but Red is set on the thought. Black Cindy comes out of a stall, although it is not her bathroom. Red asks, furiously, "Don't you have a conscience? Bringing drugs into this place? Don't you remember what happened to Trisha?" Cindy gives a smug rebuff, additionally telling her that Big Boo sold her out before leaving.

Caputo and two other officers are taking inventory as Wanda Bell distributes the newsletter around. Caputo becomes angry at the article about Soso's hunger strike. He confronts their group, telling them that their demands are confusing. As they discuss, Sister Ingalls interrupts with an issue of her own - the care of the elderly.

Janae Watson is back from the SHU and explodes when Black Cindy makes a joke at her expense. Vee manages to calm her down.

Still in the cafeteria, Tiffany Doggett distributes "Safe Place" flyers. Vee's group refers to it as "snitching". Crazy Eyes suggests that she signs up so she can "keep an eye on her". Vee agrees, telling her that it's a good idea.

Pete Harper is confronted by Polly Harper and Larry Bloom, and they confess their affair. Polly tells him that she's ending their marriage, thinking that "it's the best thing for both of us". Pete slaps Larry in a moment of rage.

Back in the prison, Dayanara and Aleida Diaz talk about Mendez. Dayanara gets more upset when her mother tells her that she can sue the government, telling her that "this rape is the best thing that ever happened to you".

Alex Vause, out of prison, receives a call from Piper. Piper finds out that Kubra Balik, Alex's former boss, has not gone to prison due to a mishandling of evidence.

Polly and Larry talk in the former's kitchen, seemingly in good moods. They make out afterwards.

Healy's "Safe Place" meeting begins, with a number of inmates sitting in a circle. He gives the "talking stick" to Poussey. She gets in an argument with Pennsatucky, when they're interrupted by Crazy Eyes. Healy urges Poussey to open up, but she insists that she only slipped in the shower, glancing at Crazy Eyes.

Leanne Taylor and Angie Rice voice their complaints about Sister Ingalls acting too much like a leader. They're making more demands of their own when officers come over with boxes of pizza, baiting them with the smell. "Go ahead, girls," Ingalls tells Leanne and Angie. "Take a break from your values." They give in, and when confronted by Soso about the decision, Ingalls says that they're not needed.

Yoga Jones goes to Janae Watson, saying that she's glad she's back and that she's participating in the hunger strike. Watson dismisses her, telling her not to talk to her anymore. Saddened, Yoga Jones reluctantly complies.

Big Boo is shown with her arm around another inmate, stopping to talk to Red. "There's a health hazard that needs to be sorted out," Red spits. "A rat." Nicky Nichols, along with Gina Murphy and Norma Romano, appear from behind Boo, cornering her and chasing off the other inmate. Red gives her a bag of jolly ranchers, saying that that will be the last favor she'll ever do for her. Boo rejects it and tells Red, "you're a fucking joke." Red agrees, telling her that she'll be better off on her own. They leave, and Boo stashes the bag in her pocket, blowing her nose and mouthing "fuck".

Brook Soso is shown making a poster, seemingly for the hunger strike. Yoga Jones offers to help, but she declines. Piper and Nicky discuss Alex's safety while playing table hockey. Natalie Figueroa stomps in, demanding that the markers and posters be returned. She also tells Piper that her newspaper "experiment" is over, crumpling a copy.

The members of Red's garden club shows anger at Vee. One of them suggests killing her.

Sister Ingalls has fainted out of starvation, causing Soso and Yoga Jones to stop the strike. Still she persists, saying, "You know why I'm doing this." She is later shown being wheeled out in a wheelchair.

Piper shows up at Healy's office, only to find out that she is being transferred to Virginia. In disbelief, she asks, "When?" When faced with a week, she realizes that she'll be leaving on Visitation Day, when Alex has promised to come. "Chapman," Healy says gravely. "You're going down south. Not having closure with Alex Vause would be the least of your problems."

The bathroom is being fixed. In another, Big Boo goes to Vee, expecting friendship. However, the latter walks away, telling her, "I don't like snitches." As Vee walks out, one of the members of the garden club who suggested her death, Taslitz, is shown following her.

Ingalls is in the hospital, trying to converse with God. Desperate, she asks, "Why are you always so quiet? Why do I always have to do all the talking?" She starts to sing a hymn.

Taslitz sneaks up upon Vee and she stabs Vee multiple times. However, Vee is looking at the commotion from behind, revealing that the person she stabbed was a lookalike. "Oh, what did I do?" She despairs and runs away. Vee looks on silently, stepping back into the shadows a moment later.

Sister Ingalls awakes and protests when they try to feed her. Her struggles prove useless.

Ingall is a new Nun at the Church. She asks an older Sister when God would speak to her, indicating that she has never before felt God talking to her due to the other Nuns saying God always talks to them. The Sister tells Ingalls the other Nun's like to boast, and Ingalls should focus on giving to God rather than expecting.

Two other Nuns persuade Ingalls to take part in a rally against the Vietnam War. When they arrive back at the Church, Ingalls is worried about being late however they assure her that they were doing good work. An older Nun tells Ingalls not to be persuaded and Ingalls claims she fell in with the 'bad Nuns'.

Ingall makes very prolific options, even timing the book release "Nun shall Pass" to favor her. Ingall is faced with excommunication for turning away from the Church's beliefs and values.

Ingalls and two accomplices break into a nuclear testing facility and splatter fake blood, their trespassing can be assumed to be Ingalls' offence. 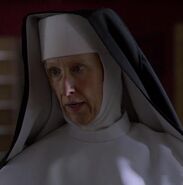 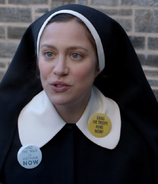 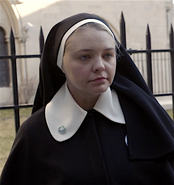 "What do you care? Didn't she screw you over in Chicago? Oh, that's right. That's kind of how you two relate, isn't it?. It's like Spy vs. Spy, but sexual"
— Nicky Nichols to Piper Chapman about Alex Vause.