watch 03:27
Wiki Targeted (Entertainment)
Do you like this video?
Play Sound

Sanja Danilović is a Croatian actress, best known for her roles in The Wailing (2013), Zombie Rocker (2010) and Orange Is the New Black, in which she portrays Katya Healy.

Danilović was born in Našice, Croatia. As an adolescent, she attended Srednja škola Isidora Kršnjavog Našice ('August Cesarec' High School) for her education. After she graduated high school, she enrolled at Ludwig-Maximilians-Universität in Munich, Germany, where she received a Master of Arts degree in Japanese. In 2003, she moved to New York and enrolled at The Lee Strasberg Theatre and Film Institute, where she began her career as an actress. She left there in 2004 and enrolled at The Stella Adler Studio of Acting, continuing her acting career. She later left that school as well in 2005.

Later, in 2009, Danilović enrolled at William Esper Studio, where she would later graduate in 2010. Also in 2009, Danilović got her first acting gig. She potrayed Sally Swan in the episode "For the Defense" of the hit crime show, Law & Order. That role would begin her cinematic acting career. In 2010, she appeared on America's Most Wanted: America Fights Back as Nina in the episode "The Pink Panthers." Also in 2010, she was casted as Michelle in a short film entitled Zombie Rocker. Since her acting career was still blossoming, but not paying enough yet, Danilović became an executive assistant at Viacom in 2010. In 2011, she appeared as Kate in the movie Far Rockway. She also became an Offshore Contractor for Appen Butler Hill Inc. in April of 2011. She would work there for 16 months until July 2012. Danilović appeared in Law & Order: Special Victims unit as Dagmara Williams in the episode "Imprisoned Lives" in 2013. Also in 2013, continuing with her crime-themed acting career, Danilović was cast as Katya Healy in the Netflix original series Orange Is The New Black. This would be the role that truly got her career started. She was cast as a patient in a short entitled The Wailing in 2013. Her uncredited roles include Spiderman III, Devil Wears Prada, '79 Parts, Pacha, P.S. I Love You, You Failed Me and Gossip Girl.

Danilović is fluent in German. She has a Master of Arts degree in Japanese from Ludwig-Maximilians-Universität Munich, Germany. She holds both Croatian and US citizenship.[1] 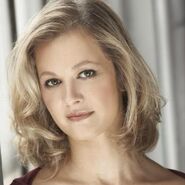 Add a photo to this gallery

Retrieved from "https://orange-is-the-new-black.fandom.com/wiki/Sanja_Danilovic?oldid=39516"
Community content is available under CC-BY-SA unless otherwise noted.