Orange Is the New Black Wiki
Register
Don't have an account?
Sign In
Advertisement
in: Under Construction, Groups and Clubs

Edit
watch 02:07
Spider-Man: No Way Home Trailer Dropped - The Loop
Do you like this video?
Play Sound

Safe Place is a thereuptical support group designed to help inmates dealing with emotional issues. It was started by Counsellor Healy.

Safe Place initially starts when Pennsatucky physically assaulted Leanne in the laundry room and was sent to Healy for counselling. Healy was told by Suzanne that he was really bad at his job, and so did this to try and prove he was good at it to himself. Healy had been seeing a therapist about his anger issues and identified with Pennsatucky, therefore he felt inspired and started the support group.

Suzanne, Blanca, and Poussey join. Suzanne joins as ordered by Vee to keep an eye on Poussey. Blanca joined to deal with the trauma she gained while in Psych. Poussey joined to deal with her depression and lonliness as caused by the abandonment of her from the Black Girls. It is hinted that joining takes a shot off the inmates' permanent record.

When Poussey states that she is bored, Pennsatucky states that it isn't an emotion (it wasn't on the emotion chart) which annoys Poussey. Poussey states she can't talk without the stick which leads Pennsatucky to claim she is exempt and she has a special position within. Healy states this isn't true and tries to change the subject, but Poussey is annoyed still.

The next day, Suzanne, Blanca, Poussey or anyone except Mr. Healy and Pennsatucky come.

After seeing Pennsatucky hanging out with Big Boo, despite his speech on lesbians, he decides to end the group.

Everyone is encouraged to state how they feel, but can only talk when they hold 'the talking stick.'

A chart of emotions is passed around to help encourage people to speak on their emotions and understand them and why they're feeling them. 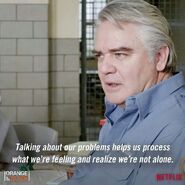