Edit
watch 02:07
Spider-Man: No Way Home Trailer Dropped - The Loop
Do you like this video?
Play Sound

In order to land her gig as an MTV VJ in Australia, she competed against 2000 other hopefuls in a three-week national search, as former VJ Lyndsey Rodrigues moved to the United States to co-host TRL. As part of the competition, she downed 100 shots of beer in 100 minutes against Jackass' Bam Margera, and kissed strangers on a busy Sydney street. However, she enjoys her job as VJ compared to her previous job as a model. "Being a model there is always something they want to change. Whether they want someone a little bit skinnier, a little bit taller, a little bit prettier, but MTV want you to be yourself ... not censoring anything and not conforming to anything."

In 2009, Rose won the ASTRA Award for Favourite Female Personality. She also travelled to Kenya to "highlight [the] amazing work" done by Global Vision International. She appeared on the first episode of "Talkin' 'Bout Your Generation", representing Generation Y alongside comedian Josh Thomas.

From July 2009, Rose along with Dave Hughes, Charlie Pickering, Carrie Bickmore and James Mathison hosted The 7pm Project, an Australian television news talk show produced by Roving Enterprises which airs weeknights on Network Ten. She left the program to pursue her own hosting projects.

In October 2009 it was announced that FOX8 had picked up the rights to UK format Ultimate School Musical, which features ordinary teenagers from a school attempting to put on a music production to a professional standard in just six weeks. The Australian version was produced by FremantleMedia Australia with Rose as host, and aired in 2010.

Rose also hosted the Foxtel Mardi Gras for 3 consecutive years before becoming an official correspondent for Foxtel for the Vancouver Winter Olympics in 2010.

In 2018, Rose was announced to be playing the DC Comics character Katherine Kane/Batwoman in a series revolving around the character for the CW.

She was selected in 2008 to act in upcoming Australian comedy film "Suite for Fleur".

Ruby Rose starred alongside Christina Ricci and Jack Thompson in the 2013 film "Around the Block".

In 2010 Ruby Rose collaborated with the Australian fashion label Milk and Honey to design a capsule fashion line, which embodies her unique style and personality. The collection named Milk and Honey Designed by Ruby Rose includes washed jeans, leather jackets and t-shirts with unique designs. The newly created clothing line is available in selected retailers in Australia.

Rose came out as a lesbian when she was 12. As a teenager, she suffered from verbal taunts and physical abuse from her schoolmates due to her sexuality, even requiring hospitalisation once when she was 16. In 2008 and 2009, she was chosen as one of the "25 Most Influential Gay and Lesbian Australians" by Same Same, an Australian online gay and lesbian community.

In 2008, she was rumoured to be in a relationship with Jessica Origliasso from The Veronicas as the two had been seen behaving intimately. However, Rose denied this in a live blog, stating that the two are "really good mates". She has also been in a relationship with ANTM contestant Lola Van Vorst and was also briefly engaged to model Lyndsey Anne McMillan. They had planned to tie the knot in Canada but broke up in late 2009.

In late 2009, after breaking up with Lyndsey Anne McMillan, she was seen kissing Catherine McNeil, an Australian supermodel, during a pool party in Los Angeles. In 2010 she is reported to have become engaged to Catherine McNeil. However the couple called off the engagement on 2 July 2010.

Rose is also known for being extensively tattooed, which she showed off in a photo spread for Maxim Australia and PETA, as part of the campaign "I'd Rather Go Naked Than Wear Fur". To see a gallery with all her tattoos, click here.

The family of Rose's godfather, the Australian boxing legend Lionel Rose, has questioned Rose's decision to take his name, saying they hardly know her and they question whether Ruby used it to further her career.

On 31 March 2013, Rose reported she was cancelling some DJ tour dates due to start in April so she could concentrate on overcoming her current battle with depression.

On 18 March 2014, Rose reported that she was formally engaged to designer Phoebe Dahl, granddaughter of author Roald Dahl and cousin of model Sophie Dahl. Phoebe Dahl proposed to her after she had already turned Rose's proposal down for three times. After a two year relationship, they called off their engagement on December 15, 2015. Reasons for their break up were the distance and lack of contact due to work which put a strain on their relationship.[1]

On 22 July 2014, Rose came out as genderfluid, saying, "I am very gender fluid and feel more like I wake up every day sort of gender neutral."[2][3] This announcement came approximately a week after she released a short film called "Break Free," in which she visually transitions from a very feminine woman to a heavily tattooed man and which she describes as a video "about gender roles, Trans, and what it is like to have an identity that deviates from the status quo."[4] However, she still uses female pronouns. 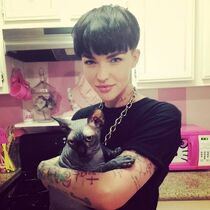 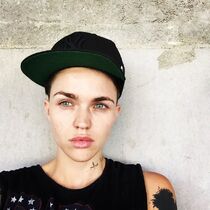 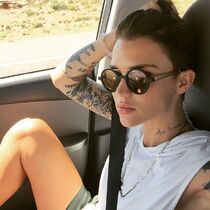 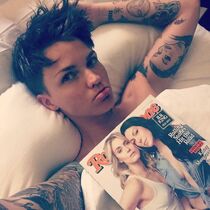 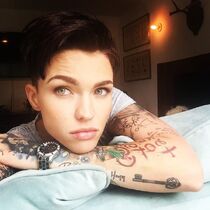