Orange Is the New Black Wiki
Register
Don't have an account?
Sign In
Advertisement
in: Season 1 Characters, Season 2 Characters, Litchfield Inmates,
and 2 more

"We Can Be Heroes" (flashback)

"We Can Be Heroes"

"Always so rude that one."
— Rosa Cisneros after killing Yvonne Parker.

Rosa Cisneros, known as Miss Rosa, was an inmate at Litchfield Penitentiary. She is portrayed by Barbara Rosenblat. The young Rosa Cisneros, seen in flashbacks during Season Two, is portrayed by Stephanie Andujar. Rosa's character is based on Miss Luz  in the memoir, Orange is the New Black: My Year in a Women’s Prison.

Rosa Cisneros is a wise yet cynical character mainly due to her terminal cancer. In her youth, she was wild and carefree, which eventually leads to her arrest. She also believes she is cursed as every man she is with dies shortly after.

For a list of episodes featuring Rosa's flashbacks, see here.

Miss Rosa robbed multiple banks with three men (Marco, Andy and Don) beginning in 1982. However, every time she would get close to one of her partners while robbing banks, something horrible would happen. Initially, she was married to Marco, but he died of a gunshot wound after robbing their first bank. Then, she married Andy, who died of a heart attack just after another robbery. Miss Rosa was then romantically interested in the last man in the group, Don, and after a heist she asked him to pull the car over. He thought she wanted to have sex, but she actually wanted to rob another bank - one that they had no prior knowledge of. He refused, but Rosa, in a trance of excitement and empowerment, went ahead alone, resulting in her arrest ("Appropriately Sized Pots").

In flashbacks of Rosa's life upon first entering prison, we can see that the uniforms are different and she uses a phone while speaking to visitors. This means that she was in a maximum security facility but was transferred to Litchfield later on, perhaps due to her age or cancer deeming her less of a threat.

When she first arrived at Litchfield, she fought an unknown inmate for power but lost. Quickly after, she was diagnosed with cancer, which she is "grateful for" as "no one fucks with cancer." She is a permanent bunk mate of Anita DeMarco, who also deals with health issues. She leaves Litchfield every week to receive chemotherapy ("I Wasn't Ready")​​ ("Tit Punch").

Piper was bunked with Rosa when she first arrived to prison ("I Wasn't Ready"). While bunked with Piper, she warned her about Red's undeniable power ("Tit Punch").

She played Joseph in the Christmas play. ("Can't Fix Crazy")

During a particular meal time, Vee and her gang tell her to move so they can use her table. To make her leave, Suzanne pours water over all her food. As she leaves, Rosa comments that Vee is "very rude."

During her weekly visits to chemotherapy, she reluctantly befriends a teenage boy, Yusef, also suffering from cancer. She reveals some of her past to him and even helps him execute a miniature heist by stealing a wallet from one of the nurses. She later finds him crying with his mother, and chalks it up to her "curse" until he reveals that he is actually in remission and will no longer need chemotherapy. Rosa, who is ecstatic at his news, says goodbyes and "Enjoy your life, shitpot!" as she is wheeled off.

After a visit with her doctor, she is informed that she only has three to six weeks left to live. Lorna, in a fit of compassion, leaves the keys to a prisoner transport van, which Rosa acts upon and drives from the prison at high speed. As she is making her way from the prison she sees Vee on the side of the road, and proceeds to ram her with the van stating: "Always so rude, that one". After it finally sinks in what she's doing, Rosa begins laughing as she drives away. "(We Have Manners. We're Polite.)"

After the events of the Season Two finale, she drives the prison van into a quarry, killing herself and destroying the van.

She makes an appearance in the episode "We Can Be Heroes" in Caputo's flashback to when he first started working at Litchfield. She is seen with short, brown hair, signalling that either she didn't have cancer yet or it was in an early stage.

Miss Rosa is briefly mentioned in the episode "Power Suit" in a conversation between Red, Sister Ingalls, and Anita DeMarco as they are reminiscent of her snoring in her sleep.

Miss Luz who Rosa is based upon did have cancer as well, but it is unknown if she robbed a bank just like Rosa did. 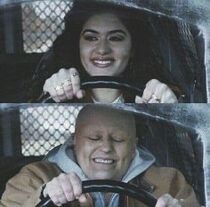