Orange Is the New Black Wiki
Register
Don't have an account?
Sign In
Advertisement
in: Under Construction, Relationships

Edit
watch 03:36
Wiki Targeted (Entertainment)
Do you like this video?
Play Sound

"Everyone I know is poor, in jail, or gone. Don’t nobody ask about how my day went…I know how to play it here. Where to be, and what rules to follow. I got a bed. And I got you."
— Taystee to Poussey in Fool Me Once.

Poussasha was the friendship between Tasha Jefferson and Poussey Washington.

Taystee and Poussey are best friends and are both incarcerated at Litchfield.

They often are the center of jokes and have lots of fun. One of their jokes is their alter-egos, where they pretend they are rich, white girls with rich, white girl problems - Taystee is "Amanda" and Poussey "Mackenzie".

Taystee is released in the episode "Fucksgiving" but is incarcerated once again in the episode "Fool Me Once," much to Poussey's annoyance as she wanted Taystee to better her life and also checked up on her a lot as seen in "The Big House"

Taystee also sings backup for Poussey during her unplanned and unexpected solo.

Their relationship is strained when Vee show up in Litchfield. Whilst spooning  each other, Poussey kisses Taystee. Apparently, she has expressed feelings for Taystee in the past, because Taystee tells Poussey that "We've been through this before." Taystee doesn't have the same romantic feelings and only wants to remain best friends.

Poussey got a bad vibe from Vee upon her arrival at Litchfield. When Vee starts having the black tribe (Black Cindy, Watson, Suzanne (aka Crazy Eyes) and Taystee) sell cigarettes, Poussey is separated from the group because she won't do it.

Vee asks Poussey to join in, and she participates for a while, but quits once she finds out that Vee has graduated from dealing tobacco to heroin. She warns Taystee, but Taystee tells her to stay away from her and Vee.

Taystee seems happy, Poussey is miserable having been abandoned by her friends.

Poussey gets drunk and tries to attack Vee in the bathroom because she is pissed at her for taking her friends, but Crazy Eyes beats her up, with the approval of Vee, leaving her sobbing on the bathroom floor, Black Cindy looking semi-horrified in the background. It is later revealed that Crazy Eyes broke Poussey's ribs in the process.

Poussey destroys a lot of Vee's tobacco, angering her. Vee kicks Taystee out of the gang and makes her watch Poussey. They rekindle their friendship and eventually bring down Vee together.p

friends with Suzanne. She lashes out at Suzanne much to the annoyance of Taystee, who had to deal with her.

Taystee becomes concerned for Poussey who has developed alcoholicism to try deal with her depression. Taystee sabotaged her hooch and blamed it on a squirrel. Taystee comes clean and Poussey joins The Norma-Worshippers, which annoys Taystee. She later leaves and the two enjoy watching Judy King get arrested together.

Poussey finds Soso with an overdose and Taystee helps her revive her. Taystee becomes a bit annoyed that Poussey and Soso's relationship is taking up all their time. She eventually becomes happy for them and the three and Janae have a waterfight.

Poussey is comforted and encouraged to talk to Judy by Taystee.

Taystee is distraught after the death of Poussey. She begins the riot after they neither called Bayley a murder nor mentioned Poussey.

Taystee leads the riot's negotiations and makes good progress in the name of Poussey. She is annoyed when Bayley to be charged for murder is low on the demands list.

However, Taystee doesn't get Bayley arrested and charged and so refuses to accept the rest of the demands (which she received). Cindy points out that Taystee became egotistical as leader of negotiations and lost her message in her head.

Taystee and Judy King, (with the help of Suzanne) set up the Poussey Washingotn fund in Poussey's name as a way to remember her. 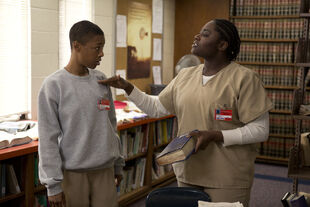 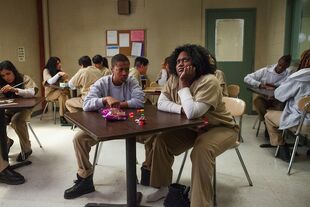