Edit
watch 03:36
Wiki Targeted (Entertainment)
Do you like this video?
Play Sound

"It Was the Change"

"Hey, well, listen, if that's who you are, then that's who you are. And there's no use in fightin' it, and if you ain't gonna fight it, you might as well embrace it, or else you're living in purgatory."
— Pennsatucky about Boo's sexuality in "Finger in the Dyke".

Pennsaboo is the friendship between Tiffany Doggett and Carrie Black.

Boo and Doggett's first on-screen interaction is when Boo joins in on Alex's plan to make Pennsatucky believe she can actually heal people. Boo tells Doggett she's been having unclean thoughts filled with lesbian content and convinces Doggett she is ready to "take on the Lord's grace". Doggett uses her healing hands to make Boo "straight" and Boo begs for Doggett to change her back. Boo is seen giving Piper a fist bump when Doggett leaves. ("Bora Bora Bora")

In Season Two, Boo and Penn sit next to each other during the power outage. Boo is seen offering Doggett some of her potato chips. During a visit to Mr. Healy's office, he offers her some Oreos and she asks him if it's okay if she were to give some to Boo. Healy tells Doggett to stay away from her. Doggett compliments Boo's tattoos and Healy tells her that Boo is only trying to reel her in, for it is all a part of the lesbian agenda.

Boo and Doggett are playing checkers during the shut down. Doggett asks Boo about "the gay agenda to take over the world". Boo decides to plays along and tells Doggett to keep her voice down. She says they will keep men as their slaves and the whole point of the agenda is for women to be in charge. Doggett asks if she has to have sex with another woman to join. Boo says they will give her an exemption ("It Was the Change").

Pennsatucky misses a Safe Place meeting to get a haircuit at Sophia's hair salon with Boo, to ensure she is accepted in on the lesbian plan to take over the world. Healy drops by and tells Doggett he is cancelling Safe Place for good. Boo teases Doggett and calls Healy her boyfriend.

In the Laundry Room, Leanne makes fun of Doggett's haircut and Angie calls her an "ignorant dumbass dyke". They taunt her for hanging out with Boo until Soso interjects. ("We Have Manners. We're Polite.")

On Mother's Day, Doggett holds a quiet service for all of her aborted children. Boo tells Doggett to stop beating herself up and that her choices were for the best. Her words, although delivered in Boo's typically brash way, do, in fact, cheer Doggett up and convince her that she did the right thing. ("Mother's Day")

Boo visits Doggett at her cell block and asks to borrow some toothpaste since her commissary is low. Doggett says she doesn't need toothpaste since her teeth are porcelain. Boo sits next to Doggett on her bed and notices all of the mail from the anti-abortion group. She reads a card and finds out Doggett has been receiving money from her supporters.

Doggett admits to Boo that the only reason she shot the nurse was because the nurse hurt her feelings. She asks Boo if she still likes her. Boo laughs and says that made way more sense than shooting a complete stranger. Doggett goes off to tell the anti-abortion group the truth, but Boo stops her.

Boo and Pennsatucky get Sister Ingalls to help Boo pose as a convincing Christian so that she can receive money from the anti-abortion group as well. Ingalls asks Boo what led her to see how far she strayed from the Christian life. Boo says she could never find the right man, but one day "this chubby Santa Claus-looking guard showed up" and after one look at him, she was "sticky in the knickers for monogamous hetero love". Doggett fake barfs and Boo laughs.

Lorna and Sophia give Boo a makeover so that she can convince the religious group to fund her. Penn tells Boo she looks weird. Boo stares at herself in the mirror and says she looks like her mother.

Boo meets with the Reverend in the visiting room. He says that he has spoken with many people like her, calling them faggots and refers to being gay as an illness. She yells at him and is escorted out of the visiting room.

Boo, back to her normal self, and Pennsatucky are eating snacks in Doggett's cell block. Doggett tells Boo seeing her as someone else was scary and out of place. Boo tells Doggett about her mother and how she wishes she said goodbye to her, but she was dumb. Doggett applauds Boo for being brave that day, but Boo says all she did was show them who she really was, "a big, stupid, stubborn pussy-loving dyke". Pennsatucky, who once got a girl sent to the SHU for simply dancing with another girl, tells Boo that there's no use of fighting who she is, and if she isn't going to fight it, she might as well embrace it.

Boo pulls a toothpaste out of her bra and tells Doggett she needs to start brushing. Doggett tells Boo that she's still taking money from the pro-life group and the two high five. Boo says tomorrow the two of them will talk about flossing. ("Finger in the Dyke")

Coates, a new Correctional Officer and donut shop employee, grows a liking for Pennsatucky. Pennsatucky tells Boo about Coates, describing him as "the cute one with his scraggly goatee". Boo tells her that she still believes she'd make a good dyke, and claims diving into all that facial hair is no different than pussy. Boo suggests sucking his dick and get them both an ice cream cake, but Doggett reminds her it would melt before it got there. However, Doggett and Coates' relationship quickly becomes abusive when he forces himself upon her without her consent and rapes her. Pennsatucky allows him to abuse her, thinking it is her own fault. ("A Tittin' and a Hairin'")

Boo visits Pennsatucky in her cube and asks where her donuts are. Doggett says her stomach hurts and that she

doesn't feel like talking about snack foods. She shows Boo a bracelet Coates gave her, and Boo notices bruises on both of Doggett's arms. She asks if he forced her and Doggett says she could have used a warning, but it's not his fault since she led him on. Boo tells her to take the bracelet off.

Pennsatucky and Big Boo are talking near the van, thinking of ways to have revenge on Coates. Doggett suggests telling Joe Caputo, knowing he fired Pornstache for 'raping' Dayanara, but Boo objects, saying that was only because Daya had undeniable proof. Boo says that they need to have revenge on him, to which Pennsatucky asks if she's planning on killing him. Boo says that would be too messy, and that they instead have to rape him back.

In the cafeteria, Pennsatucky thinks she and Boo need a back up plan. Boo asks if Doggett is pussying out on her. Doggett reveals her fear of getting sent to SHU. Boo recalls Doggett to when she was in the Puppy Program. She reveals she has been keeping a doggie sedative just in case she would like to fake a seizure or go on vacation to the hospital. She tells Doggett she cares about her so much that she is willing to burn that dream for her. Doggett asks Boo to clarify if they are going to drug Coates or not. Boo says after they drug his coffee, they will shove a flashlight up his ass. Pennsatucky thinks a flashlight would be to big and suggests a broomstick, but then takes it back because he might get splinters up his ass. Boo reminds Doggett that his comfort is not their concern.

Coates drinks his coffee and passes out in the hallway. Boo and Doggett drag him into the laundry room and pull his pants down. Boo grabs the broom and the two of them put on gloves. Neither of the girls are able to shove to broom up his ass. Doggett tells Boo this is too creepy for her and Boo admits she only did it for her to get her rage out. Penn says she is not raged, just sad. ("Don't Make Me Come Back There")

Boo and Pennsatucky arrive to movie night late and sit in the black. Doggett thinks Coates felt bad after he raped her, and fears he might hate himself. Boo bluntly replies that he should since he is a rapist. Doggett believes it's good that they didn't go through with it because they would be the ones hating themselves instead. Boo hopes that's still a consolation the next day when she has van duty. She proceeds to complain about the lack of justice in their situation.

Doggett fakes a seizure during van duty, costing her her job as driver. Both her and Boo soon learn that she has been replaced by Maritza Ramos. They exchange worried looks.

Boo and Doggett are seen playing in the lake with Angie and Leanne. ("Trust No Bitch") 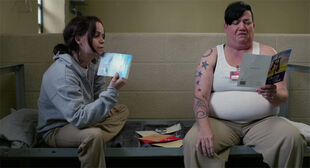 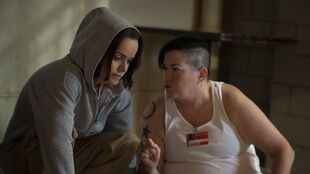 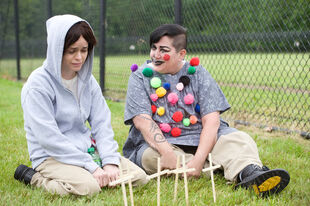