Orange Is the New Black Wiki
Register
Don't have an account?
Sign In
Advertisement
in: Civilians, Season 1 Characters, Season 2 Characters,
and 3 more

"Just Desserts"
Pat Warren is the adoptive mother of Suzanne Warren, also known as "Crazy Eyes". She is portrayed by Erin Davie in flashbacks and Mary Boyer in the present.

Pat was overprotective of Suzanne when she was growing up, often pushing her to do things she didn't really want to do.

In flashbacks Pat is shown with long blonde hair and blue eyes; however, in the present, her hair has gone grey and been cut short.

Pat is married to Dennis Warren, and together they have two daughters, Suzanne (adoptive daughter) and Grace (biological daughter). It was implied that they adopted Suzanne after being unable to have a biological child.

Eventually, the two do conceive a daughter, Grace, who they tell Suzanne is their miracle baby. Suzanne fell in love with her adoptive younger sister immediately, though Pat and Dennis seemed wary of letting her hold her too long.

Pat attempted to make sure Suzanne never felt left out, sending her with her younger sister to social events because she had few friends her own age. ("Hugs Can Be Deceiving")

Pat and Dennis spend Thanksgiving with their adoptive daughter instead of Grace for some reason (she may be spending it with Brad). Pat and Dennis fuss over Suzanne's hair, but Suzanne explains she likes her hair the way it is. ("Fucksgiving")

It is revealed that Pat and her husband come in for visiting hours often enough that Suzanne considers it part of her regular schedule, which is obvious during the riot when Suzanne is feeling the effects of this schedule being disrupted. She sits in the visiting room believing that she is talking to her mother. Pat can be seen outside the prison with other inmates' families and loved ones. She has a brief conversation with Piper's mother, Carol Chapman, about having daughters in prison. ("Storm-y Weather")

During Suzanne's interrogations, Pat appears to be present for each questioning, offering Suzanne sound advice along with her lawyer. After this, Suzanne is given a psych examination where Pat sits in the corner, telling her to focus when she has disassociate episodes with all of the psych inmates. Suzanne finally does so, and is cleared. It is later revealed in the episode Pat was never there, and a result of Suzanne's hallucinations due to her being off her medication. Although initially confused, Suzanne is lucid enough to realize she had imagined her mother. ("Who Knows Better Than I")

Pat visits Suzanne at Max. Suzanne is beginning to question the justice system after Taystee's false conviction for murder, and asks her mother if her own sentence is fair. Pat reminds Suzanne that her sentence is supposed to be making up for what she did to Dylan, and that she is receiving help for her mental difference. When Suzanne says that her sentence is not doing any of those things, Pat concedes that Suzanne's sentence is not fair. ("Just Desserts")

"There are as many types of interesting as there are people."
— What Pat used to tell Suzanne Warren
"I don't really drink, but I could use about a gallon of vodka right now."
— Pat Warren to Carol Chapman ("Storm-y Weather") 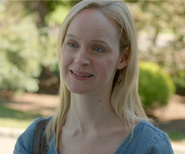