Orange Is the New Black Wiki
Register
Don't have an account?
Sign In
Advertisement
in: Litchfield Inmates, Kitchen Staff, Season 1 Characters,
and 5 more

Edit
watch 02:35
'Orange is the New Black' Profile: Norma Romano
Do you like this video?
Play Sound

"Tongue-Tied"
Norma Romano was a former inmate at Litchfield Penitentiary. She is portrayed by Annie Golden. She serves as a recurring character throughout the series, but is somewhat of an anti-villain in Season 3.

Norma is a partial mute because of her severe stutter. She is quite introverted and doesn't speak with fellow inmates - the only time her voice is heard aloud is singing for a Christmas play song at the end of season one and comforting Soso after Poussey's death as well as her flashback episode "Tongue-Tied" (even then her only words are "My" and "Son of a bitch"). She uses her notepad to talk with others at Litchfield. She is quick to help others, and is happy to help in the prison kitchen. Norma's a dedicated and loyal friend to Red, even helping her to shave her legs. She has an irrational fear of the spin cycle.

Norma's straight strawberry blonde hair is usually in a bun or ponytail with bangs. She has big, kind brown eyes, small lips, and does not wear any make-up.

For a list of episodes featuring Norma's flashbacks, see here.

In 1975, Norma married a spiritual guru named Guru Mack who she met at one of his transformation workshops. Mack claimed that he could feel connected to her and understand her, even though she could not speak to him due to her insecurities regarding her severe stutter. Sometime later, she was among many other women who married him on the same day and joined his polygamous cult.

Years later, it was only her left with Guru Mack, who faced federal charges for forcing women into his cult. He acknowledges that he was a fraud and a false prophet, saying that she wasted her life. After he mocked and screamed at her, she pushed him off of a cliff. After he fell to his death, she brokenly shouted "son of a bitch" and cried. Other than the Christmas pageant in season one and after Poussey's death, when she is comforting Brook, it is the only time we hear her speak. (Tongue-Tied)

Norma also witnesses Vee's brutal attack on Red over the rights to the smuggling operation ("40 OZ of Furlough").

Norma is introduced as one of Red's most loyal friends at Litchfield and an important part of her prison family, dating back to Red's arrival in the prison. She is known as the "quiet one that works in the kitchen," but she does not have a labeled nickname. Though Norma does not speak throughout the whole season, some inmates enjoy her companionship. During the Christmas play in the season's finale, when Suzanne froze, Norma sang the lyrics instead, revealing a stutter-free and sweet, high pitched singing voice.

Norma takes Gina's side after she is burned indirectly by Red. Eventually, Red apologizes to Norma and Gina, and they accept her apology.

Norma accidentally creates a religion due to her perceived abilities. She follows in Gloria Mendoza's footsteps by offering spiritual guidance to people and using calming techniques she's learned from Guru Mack. She gains a huge following and becomes a figurehead.

Norma is seen sitting with Red and Piper, Piper mentions how it felt good to finally be sophisticated and "sit at the big girls' table". She mentions how only her and Red sit at the table, offended, Norma drums her fingers on the table to get Piper's attention.

After Poussey's death, Norma sings You are the Light by Lone Justice to Soso who is distraught over the event, and sobs ("Toast Can't Never Be Bread Again").

Norma hides in the TV room when rumors circulate that a guard was carrying a gun and had shot someone in prison despite it actually being Dayanara, who is currently carrying Humphrey's gun. As Lee observes her and the inmates lying on the floor of the room because the prison alarm is ringing everywhere, he states that he will protect them. Nicky and Lorna enter the room trying to steal Lee's keys and announce that he is under arrest by them and that they are under control. Norma, Anita and Weeping Woman get up and immediately attack Lee and capture him, taking him to the Spanish Harlem, where the guards are being held hostage.

Norma is not seen until the second day of riot when she, Gina, Yoga, Anita, and Gloria receive a letter from Frieda informing the way to their secret bunker, where they spent the rest of the afternoon and evening smoking and drinking, until Gloria leaves because of problems with her son. When playing cards, the women hear Piper's cries and discover that Piscatella is torturing Red and other inmates. Gina lures Piscatella to the bunker and they capture him. Norma ties a cloth to Red's head, covering her hair scalped by Piscatella.

When SWAT invaded the prison to capture all the inmates, Norma, Gina, Anita and Yoga left the bunker to surrender peacefully, in fear of retaliation, for having Piscatella trapped in the pool. They are the first inmates to be evacuated from prison and at night, Norma is last seen walking worriedly, toward the bus, destination unknown.

She is not seen in season 6, as she was transferred to a prison in ohio.

She first appears again on the last episode of Season 7. 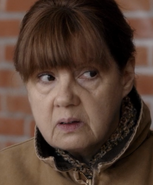 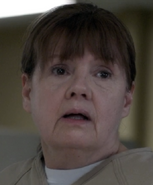