watch 03:27
Wiki Targeted (Entertainment)
Do you like this video?
Play Sound

"It’s getting clearer every second that you’re totally bat-shit crazy, but you’re a beautiful, sweet girl. Fuck this guy. So many people are gonna love you."
— Nicky to Lorna about Christopher in "Little Mustachioed Shit".
"Maybe you'll realize that you were just hopelessly in love with an incredible, insane, beautiful woman who is never going to love you back"
— Nicky on her love for Lorna in "Pissters!".

Nichorello is the friendship and relationship between Nicky Nichols and Lorna "Morello" Muccio.

In the beginning of Season One, Lorna and Nicky had an established sexual relationship together. Lorna suddenly ended the affair, feeling guilty about betraying Christopher, her supposed fiancé, which upset Nicky. The two remained close friends.

In early Season Two, it is revealed that Christopher is not actually Lorna's fiance. Lorna breaks into Christopher's house while no one is home and escapes undetected. In "Little Mustachioed Shit", it is announced that Lorna has a visitor to both her and Nicky's surprise. A hostile Christopher comes to visit Lorna and tells her he knows that she broke into his house. He threatens to kill her if she ever comes near him or his family again. Nicky watches the altercation through the window and Christopher asks a humiliated Lorna if she's been lying to everyone about their relationship. Lorna runs out of the room after Christopher announces that she's been stalking him and a sympathetic Nicky follows.

Lorna tells Nicky that while she was supposed to be at the hospital, she snuck out and went to Christopher's house. Nicky tells her not to do that ever again and that it's a miracle she didn't get caught. Lorna asks Nicky if she hates her and Nicky says she doesn't. She tells Lorna that she's a beautiful, sweet girl who many people will love. Lorna cries and says no one will love her. Nicky tells her she does and they hug.

In Season Three, Nicky and Luschek decide to sell the heroin Vee smuggled in Season Two so that everyone stays out of trouble and Nicky remains clean. Their plan is soon ruined when the stash is stolen. In reality, Nicky has hidden it in the laundry room for her own use. The meth heads discover the stash and begin using it. Luschek tells Angie to either tell him where the heroin is, or rot in Max. Shortly after, he finds the stash in their bras. The meth heads tell a correctional officer to search in the Electrical Shop for drugs.

Meanwhile in the Electrical Shop, Luschek tells Nicky he sold all of the heroin. Caputo and two officers come in for a drug sweep. Caputo tells one officer to search Luschek's desk and a bag of heroin is found. Luschek calls Nicky "a fucking junkie" and frames her. Caputo orders the officers to send Nicky "down the hill". As Nicky is being escorted out, Red and Morello rush over and ask her what happened. Nicky says she loves them both and is lead out of the building. Lorna admits she loves Nicky too. A dejected Lorna watches Nicky enter the van from the window.

After Nicky is sent to Max, Lorna is seen crying often and no longer wearing any makeup. Gina and Norma struggle to comfort her. She later begins to start several correspondences with pen-pals to scam for money. The plan fails when she confuses one pen-pals interests with another. Vinnie confronts her about this and she tells him that she became lonely after they sent "the only person who cared about her" to Max. He forgives her. They grow closer and Lorna soon proposes to him during visitation. He accepts and they are married in the visitation room.

In Season Four, Nicky gets out of max and immediately wants to get back with Morello - she doesn't believe that her marriage is the real deal. Lorna is upset with this and constantly rejects Nicky when she tries to make a move but they remain friends throughout Season 4.

In Season Five, "Riot FOMO", both Nicky and Lorna acquire the medical room after persuading Angie and Leanne to get out by figuratively stating that they’d all “take a chill pill and have a nice discussion” and by managing to obtain the keys from officer Dixon. Suggestively, for the sake of Nicky’s sobriety, Lorna insists she keeps hold of the keys to the cage and claims Nicky will never get them from her when she jokingly comments that Lorna has a mental picture of “me holding you tight… And close” when asking if she’s holding them in a tight place.

In ‘Pissters!’, the two prescribe medication to various inmates, showing Nicky’s intellect when it comes to her knowledge on different kinds of drugs for different issues, including their side effects. For this, she is nicknamed ‘Doctor Nicky’ by Lorna. The two are also accompanied by Brook Soso, who asks for drugs to help her cope with her grief after the loss of Poussey. While suggesting drugs such as Klonopin to help numb the pain, Nicky indirectly confesses her feelings towards Lorna, explaining that she realized she is hopelessly in love with, and describes her as an “incredible, insane, beautiful woman who is never going to love [her] back” after debating that if Brook were to take the drugs, she’d end up getting addicted to heroin and sent down to Max for doing some “stupid junkie shit”. Lorna reacts to her statement, however does not respond.

Nicky is later seen as a 'therapist' in ‘Flaming Hot Cheetos, Literally’, where she advises the Weeping Woman to move on after explaining her grief over her dead pet. Lorna soon arrives, describing that she’s been having sex dreams in which she is riding a whale in the ocean. As Nicky cuts her off, she then begs to have sex with her, stating that she’s serious and has missed her so much. Nicky kisses her and they agree “what happens in the riot, stays in the riot.”

The two later meet in the canteen and Nicky suspects that Lorna only came to express her ongoing commitment to Vinnie. Much to her surprise, Lorna reveals that she believes she is pregnant upon noticing while having sex, that her nipples have changed colour which is a typical sign of pregnancy for the women in her family. Nicky, however, refuses to believe Lorna when she argues that she does not need to take a pregnancy test because she “just knows”. Additionally, Lorna also blames her lust for her on her uncontrollable hormones. A despaired Nicky reveals her love for Lorna, though explains that she needs help as she is unable to support her while also referring to herself as a “dumbass, sucker crazy person for letting [herself] do this again”. In addition, she argues that the ‘prison therapist’ would exclusively tell her to never do ‘this’ again as a verb for their relationship. Nicky then leaves, leaving Lorna on her own.

"It's about comfort, right? Hey, Morello, remember when we used to comfort each other?" — "Sure. You were very comforting.""
— Nicky and Morello mocking Alex and Piper ("Bora Bora Bora")
"There's the girl who has been planning her wedding for months, just like everything is normal. Oh, but she is also sleeping with the hot, lesbian junkie. How's that for a prison cliche?"
— Larry about Nicky and Morello ("Tall Men with Feelings")
"Ahh! I think I did the left side too much. The arch is too high?" — "Yeah, it looks like you're really skeptical about everything, but I think the leery look is hot."
— Lorna and Nicky ("Little Mustachioed Shit")
"No, it's not fair to Christopher. And I need to start tightening up. You're making me feel like a cave."
— Morello breaking up with Nicky ("The Chickening")
"Just at least get me off first, all right?" — "That's not very classy." — "We're having sex in a fucking chapel. Come on, you wanna give me blue balls? "
— Nicky and Morello ("The Chickening")
"Straight girls... they'll fuck you up every time."
— Nicky to Alex about Morello and Piper ("Fucksgiving")
"Look... the only person that cared about me, they took her away to Max. And I'm so lonely. And I thought, if I wrote to enough people, then maybe I would find somebody and, oh... I watched so much Discovery Channel."
— Lorna to Vince about Nicky ("Ching Chong Chang")
""I love you so much, Lorna.""
— Nicky to Morello ("Flaming Hot Cheetos, Literally")
"No, No, nobody is going to love me- I do"
— Nicky comforting Morello ("Little Mustachioed Shit")
"Maybe you'll realize that you were just hopelessly in love with an incredible, insane, beautiful woman who is never going to love you back"
— Nicky to Soso about Morello ("Pissters!") 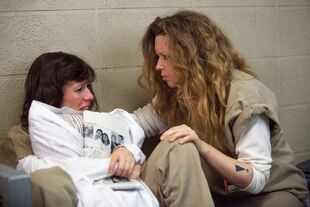 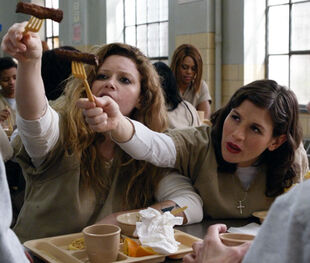 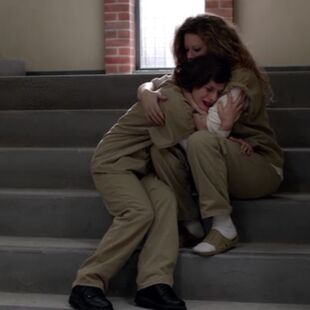 Add a photo to this gallery
Retrieved from "https://orange-is-the-new-black.fandom.com/wiki/Nicky_and_Lorna?oldid=62994"
Community content is available under CC-BY-SA unless otherwise noted.