Orange Is the New Black Wiki
Register
Don't have an account?
Sign In
Advertisement
in: Under Construction, Litchfield Staff - Minimum Security, Season 1 Characters,
and 12 more

Natalie Figueroa (commonly known as Fig) is a main character and the former executive assistant to the warden at Litchfield Penitentiary and now the current warden of Litchfield's ICE detainment facility. She is the Tertiary antagonist of Season One and the Secondary antagonist of  Season Two. She becomes an anti-hero in later seasons.

Figueroa comes off as incredibly confident, professional, and arrogant. She is often very mean, cold, and manipulative towards the inmates and staff, and cares more about the reputation of the prison than the welfare of the prisoners.  She dresses in expensive clothing and designer shoes and drives a Mercedes convertible.  It is implied that she started her job with optimism for change, but was broken by the system.

It is shown in Season 2 that a lot of her manipulativeness and toughness comes from helping her husband, Jason, embezzle money for his state senate campaign. She has doubts about what they are doing and fears what will happen if they get caught, but Jason quickly reassures her that they won't and that what they are doing is for the greater good of the state. After a campaign event where she catches her husband making out with his campaign manager, a man, she appears physically and emotionally weaker.

At the end of Season 2, Piper finds piles of candy wrappers she had binged on in her desk drawers, hinting that she has bulimia, which she confirms herself in Season 6 while talking to Joe Caputo. She is also revealed to have anorexia in Season 6. She developed this anorexia after Courtney Cox was pulled onstage at a concert instead of her, as she thought she was too fat to be pulled. She stated that this moment caused her to be a more determined person.

After the discovery of her husband's affair, she begins having "hate sex" with Caputo in Season 3. She proclaims that she only sees Caputo because he is a "good lay", but as their relationship further develops, she seems to care for him. He attempts to break her hard exterior in Season 6 by asking to see the "real Natalie" and singing karaoke to her.

By Season Seven, Figueroa has transitioned into a very different character. Her exterior toughness and negative reputation seem to make her sad. She still utilizes her tough personality at times, but more frequently she is shown behaving softly and caring for others around her. Her relationship with Joe Caputo seems to have helped her become more in touch with her kind side. She is also very supportive towards Tamika Ward, when she takes over her job as Warden. She even says kind things to other people, especially Joe. But, her snarky behavior never fully goes away and she tends to disguise her compliments as insults.

As a young girl, Fig was best friends with a girl called Tracy Loomis who began puberty before her, and as a result of this, Tracy became popular because Tracy supposedly had sexual interactions with a boy named Jason. This then resulted in Fig naming her vagina after Tracy as she found Tracy and her vagina to be a "bitch".

In Changing Winds, she tells Joe Caputo that she used to be fat, which she firmly believes resulted in her not being pulled up on stage by Bruce Springsteen during the shooting of the "Dancing in the Dark" video.

In season one, Natalie is mostly shown butting heads with Joe Caputo, whom she considers to be incompetent at his job, over management of the prison.  She comes across mostly as cold and condescending, but shows more humanity than some of the other prison employees when Tricia Miller dies.  She also sternly lectures Sam Healy about calling Piper Chapman's fiance and telling him that she's having a lesbian affair.

In Season Two, it is revealed that at the expense of the prison, she embezzled money from the Department of Corrections by cutting funding for programs and other "luxuries". At the expense of the inmates, she covered up events that were potentially damaging to the reputation or funding of the prison. Piper Chapman, sick and tired of the clearly corrupted prison, tried along with a reporter to uncover the scam. In revenge, Fig attempted to have Piper transferred to another facility, motivating Piper to steal files from Fig's office containing incriminating evidence related to her embezzlement scam.

In "We Have Manners. We're Polite." Fig is busted by Joe Caputo who has the evidence obtained by Piper, in an attempt to buy Caputo's silence, she performs oral sex on him, but to no avail, as Caputo has already spoken to the Warden. Fig subsequently resigns as Executive Assistant to the Warden.

Natalie is living with Jason Figueroa in Albany after he wins his campaign for senate.  Caputo calls Natalie when the prison is going to be shut down.  He threatens to expose her and her husband to their voters, and she meets him at the prison with a business plan from MCC.  She advises him to schedule a walkthrough as they were previously interested in buying the prison.  She is later seen to be having an affair with Caputo, most likely to escape her marital problems with her husband, Jason Figueroa, a closeted gay man.

In "The Animals", Caputo visits Natalie's large house, where she is alone, drinking wine. Caputo asks if Natalie is drunk, and she invites him in. He declines at first, telling her that he has a girlfriend - a "weird, lying, gun-toting, manipulative, corporate girlfriend", which Fig already knew, being friends with someone named Margie at MCC. He eventually agrees to go in and "just talk". In "Toast Can't Never Be Bread Again", it is hinted that they had sex when Linda spots that Caputo has bite marks on his ear.

Figueroa is sent into the prison on behalf of the governor to negotiate the inmates' demands with Taystee in an attempt to end the riot and free the hostages. She goes in planning to dismiss most demands, but it becomes apparent that Taystee did her homework. Eventually, Caputo is brought in to help give the inmates credibility, and after pulling all-nighters, a deal is made; all of their demands will be met - besides justice for Poussey. She explains that they don't have the power to ensure that CO Bailey would be arrested, and Taystee turns their whole deal down. Later, it is assumed that she tells the officers where the old pool is so they can retrieve the ten inmates hiding down there.

Figueroa is reinstated as warden at Litchfield Max. She begins to see Caputo again, although her being warden upsets him. Their relationship develops to the point that he tells her she's his "girlfriend." She starts an unlikely working relationship with Linda Ferguson, reluctantly helping her when MCC faces a public relations nightmare after the riot, saying PR college students could be free interns, which Linda claims they created as a team. Fig is mocked by Linda as she is looking at clothes online. ("Gordons") Joe decides to take her on a 'first and final date' as he was meant to leave for Missouri. They go to a restaurant and sing karaoke together. She later is sad when she comes to terms with Caputo possibly leaving on their first date. The next morning, she's at his house and shows her soft side ("Break the String") After Tina Swope's attack, she orders Hopper to end mixed yard time, much to his dismay as his Fantasy Inmate points were halted. Later, she is on the phone to Joe when he is telling her he took the report on the riot from Herrmann after he got Cindy's tip. She advises him not to follow Herrmann ("Chocolate Chip Nookie") She helps Caputo figure out how to undermine MCC to try to help Taystee. Figueroa arrives at the prison asking to meet with Hopper (who panics, assuming she knows about his drugs), she makes him do the Prisoner paperwork onto the new system as requested by Linda. He is relieved which she assumes is becuase he loves paperwork. She later comes back into his office, revealing that MCC wants more violent inmates and that's why they're releasing the top 25. She tells him to stay up all night doing the paperwork and she'll pay for his dinner (for under $12) ("Double Trouble") After the trial, she takes care of a beat-up Caputo when he shows up at a MCC/Polycon Corrections event drunk and looking for her. ("Be Free") 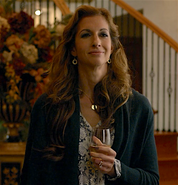