Orange Is the New Black Wiki
Register
Don't have an account?
Sign In
Advertisement
in: Flashback Characters, Season 5 Characters

Unknown (most likely deceased due to age)

Lloyd Berlin was shown to be very educated in astronomy, knowing all of the constellations and having Frieda recite them to him. He is shown to be a strong survivalist and enlists these skills on to Frieda. He could be depicted as irresponsible as he leaves Frieda alone in the woods and times her to see how long she takes to get back to their bunker, but this may just be Lloyd's parenting techniques. He is also shown to be nearly obsessed with the "Reds" (USSR) and the Cold War.

As a young man, Lloyd worked for the Marines. This can be seen in a photograph on his wedding day where he is in naval attire.

Lloyd sits with his daughter under the stars and asks her to recite different constellations. He then asks her how to get your bearings without a compass. They fall asleep, as Frieda awakes, she is left alone with very few supplies, however, she knows exactly what to do with them, and forms a makeshift compass from a needle, leaf and water.

When Frieda returns, Lloyd is unimpressed by the amount of time she took and shows little sympathy for her leech bites. Lloyd explains to her there won't be room for mistakes in the future, especially during the conflict between Russia and the US. Lloyd then says to her that she will be ready in the event of an apocalypse ("Fuck, Marry, Frieda"). 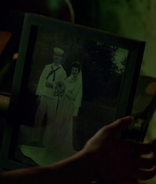