Orange Is the New Black Wiki
Register
Don't have an account?
Sign In
Advertisement
in: Litchfield Inmates, Season 1 Characters, Season 2 Characters,
and 5 more

"Take a Break From Your Values"
Sister Jane Ingalls is a former inmate at Litchfield Penitentiary. Her character is based on real-life pacifist nun Sister Ardeth Platte. She is portrayed by actress Beth Fowler.

Whilst on the surface she comes off as mature and rigid, Sister Ingalls is a very kind, well-spoken, and accepting individual. She has an upbeat personality and a sense of humor while in prison; however, Ingalls's flashbacks reveal a self-centered narcissist, who is always chasing the limelight, often abusing her position in a crusade of self-promotion.

Season Two presents a complex background for Ingalls, who is revealed to be severely flawed. The self-interested nature that is revealed in flashbacks grounds the former nun.

Sister Ingalls is still religious, often using scripture and religious ideology when giving advice to other inmates. However, her interpretations of faith and dedication are not always in harmony with strict church dogma. As such, she is quoted as considering herself more of the Pope's "homie" than his "bitch". Yet she does not reveal her excommunication to other prisoners.

She is also willing to compromise her religious beliefs when it is of benefit to her, such as pretending to be Jewish in order to receive Kosher meals.

She has a very open attitude, and tends to get along with people of all beliefs and backgrounds, as evidenced by her supportive friendship with fellow inmate Sophia Burset. Because of their religious differences, however, she is not well-liked by Pennsatucky, who became very religious after her incarceration.

Sister Ingalls has short, red hair and no obvious makeup, obeying Litchfield's regulations. She is seen more often with a religious medal than a cross, congruent with her Catholic faith.

Sister Ingalls joined a convent as a young woman in the 1960s. Though dedicated to her service to the church, she is shown even then as having an open interpretation of her faith, going so far as to ask an older Sister when God would speak to her as she had never felt his presence before.

She was first introduced to the pacifist movement when overhearing two fellow young nuns speaking about a rally in Washington DC to protest the Vietnam War. The three attend the rally, but are chastised for leaving the convent without permission. Sister Ingalls claims she "fell in with the bad nuns" and it helped to shape her personal views.

Continuing her work, Sister Ingalls became a very prolific activist. At some point, she published a ghost-written book called Nun Shall Pass, that detailed her work and her views on faith and religion. It was at this point she lost support of the church and faced excommunication, since they felt this reflected narcissism rather than a principled stand they could back.

She was eventually arrested and incarcerated for handcuffing herself to a flagpole at a nuclear testing facility as a form of protest ("Take a Break From Your Values").

Sister Ingalls is one of the inmates Piper meets on her first day at Litchfield. She is often seen associating with Red, Yoga Jones, Morello, and the other members of Red's "family" ("I Wasn't Ready").

Sister Ingalls starts a friendship with Sophia Burset, who first comes to her for her estrogen, but later begins to confide in her during a wake of marital and parenting problems. ("Lesbian Request Denied")

When Tricia dies, Jane and her friends are comforted by the prison and given gifts including a prison-made drink which Jane drinks from. ("Tall Men with Feelings")

Brook Soso, another political protester, arrives at Litchfield. Sister Ingalls refers to her as a "dirty hippie" who does not understand true protesting ("Hugs Can Be Deceiving").

Sister Ingalls hears Soso's theories on how Ferris Bueller was a figment of Cameron's imagination while standing next to her at the Valentine's Day party.  Sister Ingalls gets so fed up with Soso's constant talking that she yells at Soso, surprising everyone.

Sister Ingalls is given a "shot" by CO Fischer for once again smuggling out cornbread in order to balance her blood sugar during the "Shot quota" program that Caputo initiated.  Fischer is apologetic, but gives Sister Ingalls the shot anyway.

After being forced to take a shower, Soso decides to start up a hunger strike. Sister Ingalls is one of the inmates who join the endeavor (along with Leanne Taylor, Angie Rice, and Yoga Jones). In the end, Soso and Ingalls are the ones left participating in the hunger strike.

Sister Ingalls goes on strike for so long that it begins to affect her health. She is sent to the medical wing and stays in a room with Red (who was put there after getting attacked by Vee). Her strike attracts the attention of several nuns from around the area, who are in turn also on strike against Litchfield in support of Sister Ingalls. In order to send the nuns away and avoid more trouble, Caputo talks Sister Ingalls into eating. He then walks her up the road to tell the nuns herself that the fast is over and they can go home. About halfway to the gate, Miss Rosa drives past them during her prison escape ("We Have Manners. We're Polite.").

Sister Ingalls returns from the medical wing around the same time as Red. The pair briefly bunks in the transfer cells (along with Anita DeMarco and Alex Vause) before going back to their permanent dorms ("Mother's Day").

She is the only non-Jewish inmate to pass the rabbi's "Jewish test" in order to continue to be allowed Kosher meals, due to her knowledge of the Old Testament, saying "The Abrahamic religions are pretty much all the same, 'till you get to Jesus."  ("Where My Dreidel At").

When Caputo calls all the inmates to meet in the chapel to discuss the changes due to being bought by MCC, Sister Ingalls demands to know where Sophia Burset is, but is ignored. She and Gloria Mendoza are concerned with getting Sophia out of the SHU, especially after Nicky Nichols tells them Sophia has been sent to medical for self harm. Crystal Burset tells them she can't win a lawsuit against MCC without a photo proving that Sophia is in the SHU, so Sister Ingalls and Gloria devise a plan in which Ingalls hits Gloria, sending her to the SHU. While there, she figures out a way to pass notes on a string to Sophia, which raises her spirits. Ingalls eventually tries internally smuggling a cell phone but is discovered when she sneezes before taking a shower. Caputo uses the phone to take a picture of Sophia in the cell and gives it to Danny Pearson. He and Crystal Burset approach the director and show him the photo, which leads to Sophia's release back into minimum. Sister Ingalls, however, is still in the SHU as of the end of the season.

Sophia hears that Sister Ingalls was released on compassionate release because she caught pneumonia while in the SHU.

Sister Ingalls chained herself to a flagpole at a nuclear test site, but the real Sister Ingalls — pacifist nun Sister Ardeth Platte — actually cut a chain link fence around a Colorado missile silo with two other nuns and proceeded to paint the sign of the cross on the Minuteman III silo in her own blood, using a baby bottle as a paintbrush! 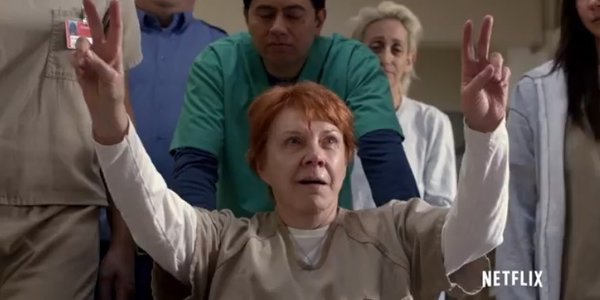