"Hugs Can Be Deceiving"

"People Persons"
Grace Warren is the biological daughter of Pat and Dennis Warren and the adoptive sister of Suzanne Warren.

When Suzanne Warren was 5 years old, her adoptive parents gave birth to Grace, who they referred to as their "miracle baby."

When the girls were older Suzanne would often play with Grace and her friends, despite them being younger, since she didn't have any friends of her own. In the episode "Hugs Can Be Deceiving", Grace's mother brings Suzanne to a slumber party Grace was invited to. She was nice to her sister but asked her not to act "weird".

As an adult, Suzanne lived with Grace and her boyfriend, Brad. In a flashback during the episode "People Persons", Grace and Brad left Suzanne home alone for a weekend and urged her to make friends, saying they spend every weekend together and it would be nice to go away just for one. This is when Suzanne brings a young friend to Grace's apartment where he eventually calls 911 because he wants to go home and Suzanne is reluctant to let him. Suzanne does not understand why Dylan has called 911 and starts to get agitated. He ends up falling off the fire escape after she chases him to the window. Presumably, this is how Suzanne ended up in Litchfield.

After this, Grace is not seen or mentioned again. Grace doesn't seem to visit Suzanne while her parents are seen to do so. 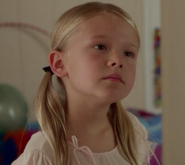