Orange Is the New Black Wiki
Register
Don't have an account?
Sign In
Advertisement
in: Under Construction, Season 1 Episodes, Janae's Flashback,
and 5 more

Piper wants the prison's outdoor running track reopened, but in order to get it, she'll have to give her corrections officer something he wants.

Watson is released from SHU (Security Housing Unit/Solitary), and concludes that it was Piper who misplaced the screwdriver. Piper confesses, but points out that Watson was initially sent to SHU for arguing with the guards. Piper, frustrated with the WAC, states "this whole WAC thing is basically bullshit." Piper tries to make nice with Alex. With Fischer's help, Piper gets the running track reopened, which pleases Watson, a former track star. Piper's appointment to WAC infuriates Pennsatucky, who was hoping to use her election to obtain false teeth. Alex tires of Pennsatucky's complaining and threatens to rape her if she doesn't keep quiet. Mendez tries to pressure Red into smuggling drugs into the prison, but Red refuses.

Note: All flashbacks are arranged in chronological order.

As a child, Janae is a naturally talented runner but finds it difficult to fit in with others, particularly boys who accuse her of "showing off." As a teenager, she is setting records and has the attention of future colleges looking to give out scholarships. However, she still does not receive the male affection she craves. At a party, the host - Three-D - tells Janae she has a real shot at a good life, and tells her not to mingle with the "thugs" his crew are. He sends her home but on her way out she runs into another man who flirts and gives her the attention she's been looking for. At a future point, they rob a store together and Janae runs ahead of him down an alleyway. He tells her to stop showing off which causes her to slow down. As she turns around a cop runs between them, facing her. Her boyfriend runs off while she is arrested. 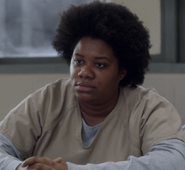