Start a Wiki
watch 02:29
'Orange is the New Black' Profile: Blanca Flores
Do you like this video?

"Turn Table Turn"
"And Brown Is the New Orange"

Blanca Raiza Flores is a main character and former inmate at Litchfield Penitentiary. She got released early in Season 6, but sent to an Immigration Facility run by PolyCon Corrections. She serves as an antivillian in Season Four and a mild antagonist in S1. She is portrayed by Laura  Gómez.

In the first season, Flores is portrayed as being dangerous and mentally unstable. After she returns from psych, she becomes calmer and more approachable, revealing a laconic personality with a dark sense of humor. In season four, her rebellious and political side emerges when she sparks a peaceful protest over the new correctional officers discriminative, racist and violent treatment of the Latina and Black inmates (then eventually all inmates).

Flores is known for her unkempt appearance. She has a uni brow, messy unkempt hair and does not seem to value personal hygiene. Many characters often ask her to shower more. She often walks with a hunched stance. However, in Season Five, she is given a full blown make over, wearing make up and the uni brow is gone for the time.

For a list of episodes featuring Blanca's flashbacks, see here.

Blanca is originally from Santo Domingo, in the Dominican Republic. She emigrated to the US some fifteen years before the beginning of the show. ("And Brown Is the New Orange")

Blanca worked as a carer for an elderly, wealthy woman named Millie. Here, Blanca was clean and well groomed.

Blanca did not like the woman much as she was rude and demanding. She also refused to use Blanca's real name, as she first read her name as "Bianca" and decided she liked it better. Blanca spotted a gardener who was working for Millie, who turned out to be Diablo.

Diablo and Blanca became good friends and started having feelings for each other.

Later, Blanca noticed a new gardener had arrived. Blanca asked what happened to Diablo and Millie explained how Blanca wasn't as focused and he was distracting Blanca from her work.

To get revenge at Millie, Blanca and Diablo had sex in her room while Blanca stared at Millie. Millie, being feeble and unable to walk on her own, was left watching the two in fear.

The next day, Millie became scared of Blanca and was quieter and submissive. Blanca acted as if nothing has happened, informed her that her breakfast coffee was made in the microwave (against Millie's wishes), and picks out her clothes, forcing Millie to wear and eat what Blanca chooses for her ("Turn Table Turn").

After this incident, Millie decided to keep Blanca and has more respect toward her, being more polite and less demanding. She still dissapproves of Diablo.

Blanca legally becomes a permanent resident of the US when she obtains a green card. Diablo throws a rave to celebrate the occasion.

One day, Millie hits a mailman while driving. Fearing the loss of her job if Millie is convicted, Blanca helps to clean the car of blood. Blanca is later prosecuted for this and is sentenced to Litchfield for being an accessory to manslaughter. ("And Brown Is the New Orange")

Piper first sees Flores in the bathroom, where she often is found occupying the only stall with a functional door. She terrifies Chapman due to her disheveled appearance and wailing in the stall ("I Wasn't Ready").

It is later revealed Flores had concealed a cell phone behind a brick in the bathroom wall, which Piper later discovers because of the vibrating ("WAC Pack"). The other inmates thought she was insane, as she would constantly talk to herself and "Diablo" ("devil" in Spanish) while inside a restroom stall. Piper later discovered that Flores had actually been speaking to her boyfriend, named Diablo, with the phone. Flores also used the phone to send nude pictures to her boyfriend, who would send pictures back. Piper received one of these whilst using the phone to play a game. However, Piper stole the phone and turned it in, in an attempt to get the track re-opened. When Flores learned that the phone was gone, she was devastated. In her anger, she went berserk and smashed off the stall door.

Flores has been to the psych ward at least once, as seen in "Tall Men with Feelings".

Flores continues working in the kitchen. She accompanied the wake of the burned books, organized by Poussey and Taystee, because of the bed bug infestation. She reveals her father's name is "Chad".

She tried the test for new work at Whispers along with Flaca, both hidden from Gloria. Flaca won a position within Whispers and, during an argument with Gloria, revealed the participation of Flores; it is unknown whether or not she had some punishment from Gloria.

Together with all the prisoners, she went to the lake when the fences were left open, although she was not seen directly in the scenes.

In Power Suit, Blanca points out to Maria that the Dominicans are now the majority. Later in the TV room, an argument sparks between Blanca, Kasey Sankey and Digori. They argue the soccer match the Dominicans are watching is boring and want the channel changed but Blanca refuses. Digori backs Sankey down from a fight, pointing out how many Dominicans are in the room. They leave. Maria asks Blanca why she'd risk picking a fight and Blanca says after being kicked down for so long, she will no longer back down to anyone, with majority Dominican inmates backing her up. Sankey and Digori later deliberately corner Blanca in a stairwell, where no other Dominicans are around. They push her down the stairs and Blanca spots Maria watching from the top. Blanca calls for her, but Maria ignores her. When two Dominican inmates help Blanca, they begin to go after the white inmates but Maria stops them. She leads them in an ambush later on, where they throw a towel over Sankey's head, pull her into a spare room, beat her then leave before she can see who her attackers are. Outside, Maria officially joins the Dominican crew and Blanca is impressed.

In "Turn Table Turn", Blanca points out to Maria that the COs stop-and-frisk of the non-caucasian inmates is not only pointless but degrading. Maria is more concerned with keeping her rival panty-selling business under wraps. Maria remarks that Blanca smells terrible. On the way to shower, Blanca is stopped for a frisk but Stratman is disgusted by her body odour. He orders her to shower or face the consequences. Inspired by this, Blanca rebels by dousing herself in whatever odorous food items she can find, to avoid being frisked. Eventually Stratman catches on and, since the SHU is full, he punishes her by making her stand on a table in the cafeteria for an undisclosed amount of time with no food or water. Dixon later tells Stratman he's made a mistake, as Blanca fiercely watches them from the table.

In "Bunny, Skull, Bunny, Skull", Blanca continues to stands there, peeing herself and not sleeping for what seems to be a period of three days. Later, Chapman tries to give her a granola bar, which makes CO Dixon become even more mad at them both, putting Piper next to Blanca in the table.

When the lock down starts, Stratman tells them they can get down.

In "The Animals", Blanca begins the peaceful protest to argue against Piscatella remaining on the force. This protest turns violent unintentionally and results in Poussey's death.

In "Toast Can't Never Be Bread Again", Blanca represents the Latina inmates and hands a bunch of paper flowers over Poussey's death. She seems genuinely upset and apologizes; the girls take the flowers.

At the start of Season Five, Flores is still seen with the Dominican girls. After the full blown riot breaks out, she is the one most responsible for locking up all the entrances with locks from commissary and other metal objects. She forms an alliance with Galina "Red" Reznikov to take down Desi Piscatella. Flaca and Maritza give her a makeover by plucking her eyebrows, putting on makeup and brushing her hair. While setting a trap for Piscatella, he ambushes her, having entered from another area in the building. He overpowers her, and she is the first prisoner he takes captive. She witnesses the torture of Red with the other captured ladies until Frieda and the pool bunker girls save them. She assists in restraining the knocked out Piscatella. After Piscatella is released by Red, she joins hands with Frieda, Red, Taystee, Cindy, Suzanne, Gloria, Nicky, Alex and Piper as guards storm the pool, ending the season.

B Blanca has been moved to Litchfield Max following the events of Season 5 and placed into C block. After being told by the prison gynecologist that she only had a few eggs left and a pregnancy at her age would be difficult, Diablo and her came up with a plan to get her pregnant. ("State of the Uterus") Diablo left a condom with his ejaculate in the visitor's bathroom during a visit while Blanca made an arrangement with Daya to pick it up during her cleaning duties in exchange for drugs from C block. Her and Daya make the swap at Rec Class, witnessed by Teng and Brock. Nicky Nichols helped her artificially inseminate herself by using a straw in the library, but the two were caught in the act by other C block inmates; Akers, Charlene Teng, Marie Brock, Shruti Chambal and Raquel Monez who proceeded to beat them both up, sending them to medical. ("Gordons") At medical, she is loud and annoys Nicky, who is trying to sleep. After being returned early from medical, (she was "the least likely to die), she is in extreme pain. Gloria helps her get into her bunk and a meal is immediately called and Gloria asks if she wants back down. She refuses, saying she doesn't need to eat and is too in pain ("Break the String")

Following recovery, Blanca was later put back into C block where she decided to lay low and to not eat with the other inmates. She finally caved into Gloria's request and returned to the public where they found out that they were not welcomed. They attempt to sit with Hoefler, who accepts, but Zirconia and Nicole Eckelcamp don't allow them to sit. She tries to sit across from Shruti Chambal, but she says her spirit animal sits there as Creech tips Gloria's tray and claims assault. Gloria attempts to attack her but is stopped by Hellman and is given a shot.  ("Chocolate Chip Nookie")

Blanca discoveres that she is going to be freed for early release and tearfully told Diablo the good news over the phone, promising the two would have the opportunity to try for a child again. Upon finishing her release from Litchfield, Blanca was immediately sent into a seperate line from the departing inmates and placed under arrest for illegal immigration. As Blanca was lead towards an Immigration and Customs Enforcement bus, a confused and unaware Diablo is seen left waiting at the prison gates. Blanca begins to cry as Diablo is disappointed. ("Be Free")

Flores gets out of the detention center while she awaits her hearing about revoking her criminal case. However, she goes to Honduras, where Diablo has been deported too.

"I had three during my punk rock days"
— Blanca
"Your country's turning brown. There's more of us everyday, fucking pendeja, and there's fucking nothing you can do about it!"
— Blanca standing up to Sankey and Digori 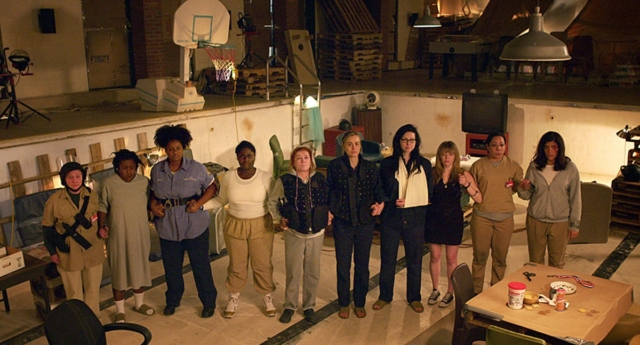 Retrieved from "https://orange-is-the-new-black.fandom.com/wiki/Blanca_Flores?oldid=67498"
Community content is available under CC-BY-SA unless otherwise noted.