Orange Is the New Black Wiki
Register
Don't have an account?
Sign In
Advertisement
in: Litchfield Inmates, Under Construction, MAX inmates,
and 2 more

Catholicism
Member of the Cult of the Holy Virgin

"Just Desserts”
Adeola Chinede is an inmate at Litchfield Penitentiary Maximum Security. She was introduced in season 6 and is portrayed by Sipiwe Moyo. She becomes associated with Dayanara Diaz in Season Seven.

Adeola is a very intelligent woman, though also has her quirks. She is often comedic, and very popular around her block. She is friendly to people and sarcastic a lot. She is willing to be friends with C-Block. She does not use drugs as a result of her father's behaviour. She has a very strong Nigerian accent. She has pet rats in her cell in a small cabinet next to her toilet; the mother is called Andrea and her children called Nutella, Briar and Julius.

Adeola was an evolutionary anthropologist in Lagos, Nigeria "mainly interested in human behaviour in a cultural context and the shifting dynamics of tribalism, and in particular, how the disputes between social psychology and behavioural ecology negotiated themselves on a micro scale." She may have been a poacher as she very vividly describes the process of an animal being killed and butchered ("State of the Uterus")

She mentioned "walking tall with a machete," potientially a reference to the reason she is incarcerated. (Chocolate Chip Nookie")

Her father was a drug addict, which has caused her to stay away from them ("The Big House")

While in AdSeg, Gloria Mendoza attempts to get Blanca Flores into the chapel so she may discuss the situation with Maria Ruiz by claiming a religious festival is occurring. Blanca explains she needs to go to the chapel and pray. Adeola joins in, and requests to go too. While in the chapel, Adeola pretends to pray while Gloria tells Blanca of her plan. ("Shitstorm Coming")

Adeola interrupts Reznikov's argument with Nicky while on the phone booths next to each other about a "movie", but are instead talking about Piscatella, trying to hide the conversation from the guard by portraying it as a movie. Adeola says to keep quiet, as she may want to see this "movie" in the future, and doesn't want to be spoiled. She then asks the person on the phone who the director is of this "movie" ("I'm the Talking Ass")

Adeola is revealed as Lorna's roommate and corrects Lorna's singing, saying that it is "billy goat" instead of "nice fur coat" from the song "Hush Little Baby". Adeola then talks about "her Andrea", who had insomnia when she was pregnant with her 5 babies, and reveals that Andrea ate 2 of them. Adeola then opens a hatch next to the toilet and reveals her pet rats. She explains that Andrea is the mother of the rats. Adeola calls the babies the "Leftovers" as a "food joke". Lorna is disgusted at first, but then gets used to them. Later on, Lorna is talking to Nicky and it is revealed that the names of the some of the rats are Nutella, Briar and Julius, but now, all of the rats have dissapeared. Adeola believes that Andrea has eaten them again. However, soon after, Nicky hears the squeels of a rat which are then discovered in the mop buckets and Andrea seems to have given birth to many more rats. The rats are released by the inmates in the room, Adeola exclaming that they are now free. ("Mischief Mischief")

Piper arrives at the library and asks if they have any memoirs. Initially, she refuses to answer as Piper's C-Block defecated in their laundry. However, Piper apologises on behalf and states that she didn't participate. Adeola then says that there are no memoirs and says there are law books. Piper says she didn't murder someone to which Adeola replied "Charlize Theron" Piper comes back asking about some photos she found and Adeola explains a cameraman used to come around. She states that all the good photos for 'porn' have been taken and 30 years the blocks had peace. Piper thanks her for her help and we are shown Adeola's book that she's reading titled "Murder v. Self Defence" ("Changing Winds")

Adeola and Daya arrive for maintanence work. Daya says they should split up and get the work done faster, but Adeola says she doesn't want to spend more time in her cell. Daya says she'll clean the visitation bathroom and Adeola will clean the actual visitation room and they shake on it ("Gordons")

She is seen at mass and abandons her original reading to inform the attendees about the Cult of the Holy Virgin. The pastor says that it isn't real as she preaches it is secret and only for women. Piper and Maria laugh at her. ("Break the String")

She is made move by Daya but protests by saying some day she'll be "walking tall with a machete" again. ("Chocolate Chip Nookie")

Lorna and Adeola are seen admiring her faecal matter, attempting to determine the sex of her baby. Adeola claims it will be a girl due to the shape and due to the fact that Lorna has gotten uglier. Nicky tells Adeola that she believes some rats have returned. Adeola corrects Nicky, and explains they all died from poison, and leaves, saying if you want her to leave,just tell her. She later attends prayer group and when Beth Hoefler admits to the attempted drowning of Maria, Adeola shakes her head. When Maria storms off and Beth asks if it was wrong of her to admit that Adeola gives her an 'obviously' glare.  ("Well This Took a Dark Turn")

When Maria accidentally bursts the balla and Artesian tells them to go inside, Adeola objects. ("Double Trouble")

When D-Block is meeting to discuss kickball and the start of the war, Nicky sarcastically renounces that Adeola is a "jack of all trades" going from church to war. She explains that she was interested in human anthropology (human behavior) and explains it very in detail using complicated words. She shows her interest in ecology and psychology, but then explains that she's willing to kill someone if it's necessary. The girls call her hilarious. She joins in on D-Block's chant. Lorna is later seen talking to Adeolla in their cell about why she has never had sex with a black person, to which Adeolla replies "you will be surprised what the human body can accomodate". Nicky asks to speak to Lorna alone, to which Adeola replies that anything that Nicky says to Morello can be told to her too. Adeola then swiftly states that this was a joke and was an impersonation of her first husband, to which Lorna laughs and states to Nicky that Adeola is a "real wild cat". During Piper and Alex's wedding, Lorna pulls out a toothbrush carved into the shape of a knife, stating that she borrowed the toothbrush from Adeola. Outside, she is very excited and runs to the kickball field. She is mocked by Badison, and gets annoyed. She prepares her shiv as Badison launches her signal and Suzanne kicks, but puts it away. She is annoyed when she gets eliminated almost immediately by Daya but enjoys the game. ("Be Free")

She begins selling hooch, which is very popular among the inmates.

She and Daya form a gang together and dominate the contraband market.

"I call them the Leftovers [chuckles]. This is a food joke."
— Adeola talking to Lorna about her pet baby rats ("Mischief Mischief")
"Go on, they don't bite. Actually that's a lie, they do bite. Really freaking hard."
— Adeola to Lorna when petting the rats ("Mischief Mischief")
"To each their own, Charlize Theron. I like to replace phrases with celebrity names that rhyme with them."
— Adeola to Piper Chapman.
"The visitor's bathroom is like Chernobyl"
— Adeola to Daya, Gordons
"I will fuck up a bitch when necessary"
— Adeola, to Nicky, after being told she is a very random person ("Be Free")
"I see you looking at me, eye-looker"
— Adeola, after Badison mocks her accent ("Be Free")

"It's always the black one who dies first."

-Adeola, after she gets out in kickball ("Be Free") 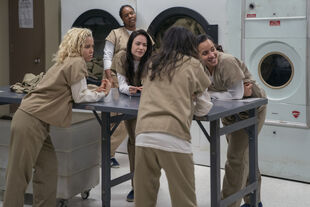 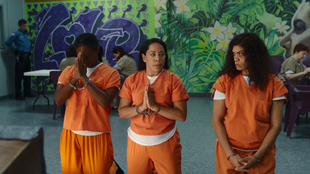 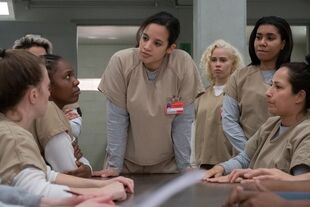